Eggplant is one of the world’s healthiest foods. Everyone will recognize it for its purple, glossy beauty as well as its unique pleasantly bitter taste and spongy texture.

But few know that it contains fiber, copper, manganese, potassium, vitamin C, vitamin B6, and thiamine. It is “brain food” because it may protect brain cell membranes from damage caused by free radicals (1).

In addition to its vast number of vitamins and minerals, eggplant also contains important phytonutrients, many of which have antioxidant activity.

Eggplants are unique because their antioxidant capacity increases after you cook it (2). Many fruits and vegetables lose nutrients when you heat them because it kills off sensitive nutrients.

It’s also a great substitute for traditional manicotti pasta noodles in our recipe, which are not allowed on a keto diet as they contain too many carbs. Gluten is also highly inflammatory for some people and contributes to inflammation in the gut.

This makes eggplant an ideal low-carb vegetable to cook with. It contains the antioxidants chlorogenic and caffeic acids, which have been shown to protect against high blood pressure and cardiovascular disease (3).

The dairy products in this recipe help increase the bioavailability of the antioxidant nutrients in the eggplant, which makes this recipe perfectly balanced.

Our recipe calls for several kinds of cheese, including Ricotta, cream cheese, parmesan, mozzarella, and sour cream. Dairy foods may contribute to lower blood pressure and reduce the risk of cardiovascular disease and type 2 diabetes (6, 7).

You can serve this dish as is or make it a side to grilled pork chops or steak.

Start by slicing the eggplant lengthwise using either a mandoline slicer or a sharp knife.

Arrange the slices on a baking tray. Sprinkle with salt and let them sit for 10 minutes to release moisture. Then blot them with a paper towel.

Sprinkle the slices with olive oil and bake for 10 to 15 minutes at 375 degrees F.

When the eggplant is done, take the slices out of the oven and spoon a mixture of the cheese inside. Roll the slices up.

Pour the marinara sauce on the bottom of the casserole pan and arrange the rolls on top.

Sprinkle with cheese and bake for 30 minutes or until cheese is melted. Serve hot! 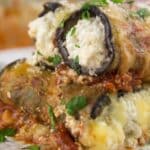 Print Pin This!
5 from 2 votes 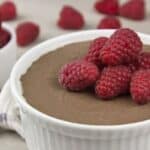 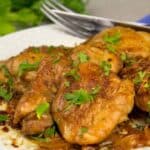 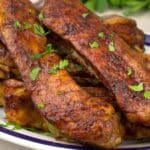 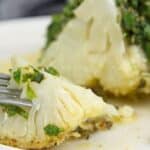 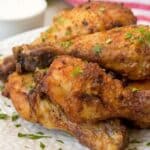 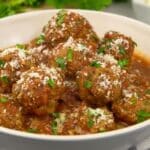