Are you a gourmand? Never tried to be the one? The easiest way to become one is to make our Keto Calzone with Ham, Cheese and Spinach Fillings. You will enjoy every crumb of it.

Our recipe is a low-carb spin on a traditional calzone which contains too many carbs to be eaten on a low-carb or keto diet.

Typically, a calzone contains a filling of meat, cheese and veggies wrapped in a flour shell and baked in the oven like a pizza.

The problem is that traditional calzone dough is made with enriched wheat or white flour. Our calzone dough contains two simple ingredients: almond flour and mozzarella, which is basically a keto fathead dough.

Almond flour is a great source of healthy monounsaturated fats. It’s also much lower in carbs that traditional white or wheat flour. When mixed with cheese, it creates a low-carb crust that’s both cheesy and nutty.

You can also add the spices of your choice to your dough to enhance the flavor. For the filling, we use spinach, ham, and more cheese!

When picking out ham, we recommend going with a high-quality piece of meat that does not contain added antibiotics, hormones or sugar. Ham also tends to be high in sodium and contain nitrates, smoky flavors, and lots of preservatives.

Be sure to watch your sodium content if you’ve been put on a low-sodium diet. You should be able to find a clean cut of ham at your local butchers or any health food store.

Our filling also calls for spinach, which is a great source of vitamins, fiber, and antioxidants. It goes great when paired with cheese and ham. You’ll need to use fresh spinach because frozen spinach will be too watery to work with!

To get that golden shell on your dough, beat an egg and coat the dough with it before putting it in the oven for a great finishing touch!

First, prepare the filling. Heat the spinach in a microwavable bowl for one minute on high. Drain excess water (you can also boil or quickly saute spinach).

Add mozzarella, high quality ham, and Grana Padano to the bowl with the spinach. Season with dry basil, salt and pepper.

Next, prepare the dough. Combine the almond flour and the mozzarella.

Roll the dough out between two sheets of parchment paper. Place the filling onto one side of the dough, fold over and seal.

If you want to have a golden sheen, brush the calzone with egg wash (a thoroughly beaten egg with some water).

Bake the calzone until golden. You will surely smell gorgeous  Italian flavor. Remove from the oven. Buon appetito! 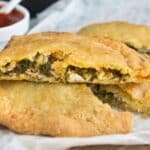 Print Pin This!
5 from 3 votes

*You can use shredded chicken meat in the place of ham.