Hot pockets were one of the first popular grab-and-go foods in the Westernized world. You could buy them frozen, usually in packs of four, and throw them in the microwave. You had a meal or a snack in a matter of minutes! They even came with a handy carrying case so you could eat it with one hand.

The problem is that these store-bought hot pockets were one of the worst foods you could eat. They were full of refined sugar and carbs, preservatives, sodium, and many hard-to-pronounce food by-products that cause inflammation in the body. They were also high in calories and very nutrient poor.

We decided it was time to give these old-school hot pockets a healthy makeover. Our Keto Morning Hot Pockets with Bacon and Egg do not contain inflammatory sugars, preservatives, excess sodium, or carbs.

These hot pockets are just too delicious and should be a part of your ketogenic lifestyle, simply because they are so easy to make and loved by many people. All you need is five simple ingredients that you probably already have on hand in your keto kitchen!

You’ll need cheese, butter, egg, almond flour and bacon. You can use ham or ground meat.

*Credit: This recipe is a part of the Keto in Five Cookbook bundle created by our friends at Tasteaholics, which provides 120 low carb recipes (30 breakfasts, 30 lunches, 30 dinners and 30 desserts) – all made with five simple ingredients, five easy steps and 5 net carbs per serving or less.

This fathead dough is so versatile that you can make many different low carb foods from it.

The process of making this dough is as interesting as the taste. It’s also quite simple. All you need to do is combine melted mozzarella with almond flour. Knead it well then roll between two sheets of parchment paper. The dough (pocket cloth) is ready.

The filling is just up to you and what you like to eat. You can have as many fillings you want, such as egg, mozzarella and pepperoni slices.

For this particular one, simply scramble the eggs with butter, add some fried bacon and place them into the center of the dough. Then fold over and seal the dough. After that, poke some holes in the dough surface with a fork then bake it in the oven.

All this results in a magnificent taste, flavor, and nutrition. Bon appetit!

These low carb hot pockets can be made in three easy steps:

#1. Making the dough: Melt shredded mozzarella in a microwave then mix it well with the almond flour. Knead the flour until incorporated.

Flatten the dough on two pieces of parchment paper.

#2. Making and Adding Fillings: Beat the eggs in a bowl with a pinch of salt (optional) then pan fry in butter.

Transfer the scrambled egg in the middle of the dough along with the bacon slices.

Enclose the filling by folding the sides of the dough. Poke some holes on the dough to release steam when baking.

#3. Baking: Set the oven to 400 F. Bake the dough for 20 minutes. Wait until it turns golden brown and firm enough to touch. Best enjoyed while warm. 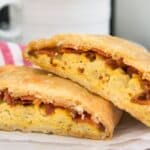