How Keto Diet Can Affect Your Cholesterol Levels Skip to content

One of the biggest concerns when it comes to following the ketogenic diet is that some people are afraid to try this way of eating simply because they think it can increase their cholesterol and clog their arteries. From the solid scientific studies we will talk about below, a low-carb ketogenic diet is shown to improve your cholesterol levels and can be an incredibly healthy choice.

Lipids, Lipoproteins and Their Impact on Health

The human body consists of cells and each cell is composed of lipids and proteins. Lipids are a type of fat or oily substance which constitutes the membrane of a cell (1).

The two most known types of lipids are triglycerides and cholesterol, which are generated in the liver and found in the bloodstream (2, 3).

There has been extensive research on whether high cholesterol levels can cause cardiovascular disorders and which type of cholesterol lipoprotein is a valid indicator.

A later study, among 3,159 Chinese adults also depicted that the ratio total cholesterol/HDL cholesterol is a stronger predictor of coronary heart risk than the levels of cholesterol lipoproteins alone (6).

A systematic review conducted in 2009 also demonstrated that the ratio of total cholesterol to HDL cholesterol and the LDL/HDL ratio are the most powerful predictors of coronary heart disease (7).

A more recent study among 168 children in Turkey provided further evidence for the significance of the total cholesterol to HDL cholesterol ratio for predicting cardiometabolic risk (8).

Ratios of cholesterol lipoproteins are not the only powerful predictor for heart disease, however. The ratio of triglycerides to HDL cholesterol can predict the risk of developing coronary heart disease and also all-cause mortality among women with suspected ischemia (9, 10).

A randomised, controlled clinical trial among 120 overweight adults with high levels of cholesterol compared the effects of a ketogenic diet against a low-fat diet. After 24 weeks, the group following the keto diet reported greater weight loss and declines in the triglyceride levels and higher increases in the HDL cholesterol levels compared to the low-fat group (11).

Similar results were reported by a telemedical guided weight loss program among 200 overweight adults, where triglyceride and HDL-cholesterol levels were lower at month 6 in the keto diet group compared to the low-fat group. The conclusion was that a low-carb diet has more benefits in reducing cardiovascular risks compared to the low-fat diet (12).

Another randomised study among 132 severely obese adults in Philadelphia also demonstrated a greater decrease in triglyceride levels and less decline in HDL cholesterol levels among the group following a low-carbohydrate diet compared to the low-fat diet group (13).

A randomised, parallel-group trial among 307 obese participants demonstrated that a low-carbohydrate, high-fat diet resulted in lower levels of diastolic blood pressure, triglyceride, and LDL cholesterol levels in the first 6 months compared to the low-fat diet group. Moreover, the HDL cholesterol increased by 23% after 2 years in the low-carbohydrate, high-fat diet group (14).

Further evidence on the effects a low- carbohydrate diet has on lipoproteins and lipids are provided by a clinical study on 29 overweight men following a restricted carbohydrate diet for 12 weeks. At the end of the trial, the LDL cholesterol was decreased by 8.9%, the triglyceride was reduced by 38.6% and the HDL cholesterol was increased by 12%. These findings show that keto diet may decrease the risk for atherosclerosis and coronary heart disease (17).

As discussed, keto diet can result in better normal-weight population.

A clinical trial among 40 adults with atherogenic dyslipidaemia showed that a low-carbohydrate, high-fat diet resulted in a decrease of triglycerides by 51%, an increase in HDL cholesterol by 13% and a decrease in the total cholesterol/HDL cholesterol ratio by 14% after 12 weeks, much better results compared to the low-fat diet group (19).

Another study also demonstrated that a ketogenic diet resulted in improved cholesterol levels compared to a low-fat diet among 20 healthy men and after 6 weeks, the keto diet group reported an increase in HDL cholesterol by 11.5% (20).

Some of the healthy fats you can consume to improve your cholesterol numbers are salmon, olive oil, flaxseed, chia seeds, nuts, and avocado.

Interventions with keto diet have proven their effects on plasma lipoproteins both in short-time and long-term studies and among adults with various characteristics, such as age, body mass, gender, type of disease. Moreover, ketogenic diets result in weight loss and fight obesity, one of the main risks of high cholesterol. Therefore, keto diet could eventually decrease the risk of cardiovascular diseases.

Finally, before you start to change your diet dramatically, you should talk with your doctor and dietitian and seek more professional advice and confirmation. If you want to try the keto diet, don’t hesitate to check this meal plan.

If you find this article useful, feel free to share it with your friends or save this post by pinning this picture below to your Pinterest board for later reference. 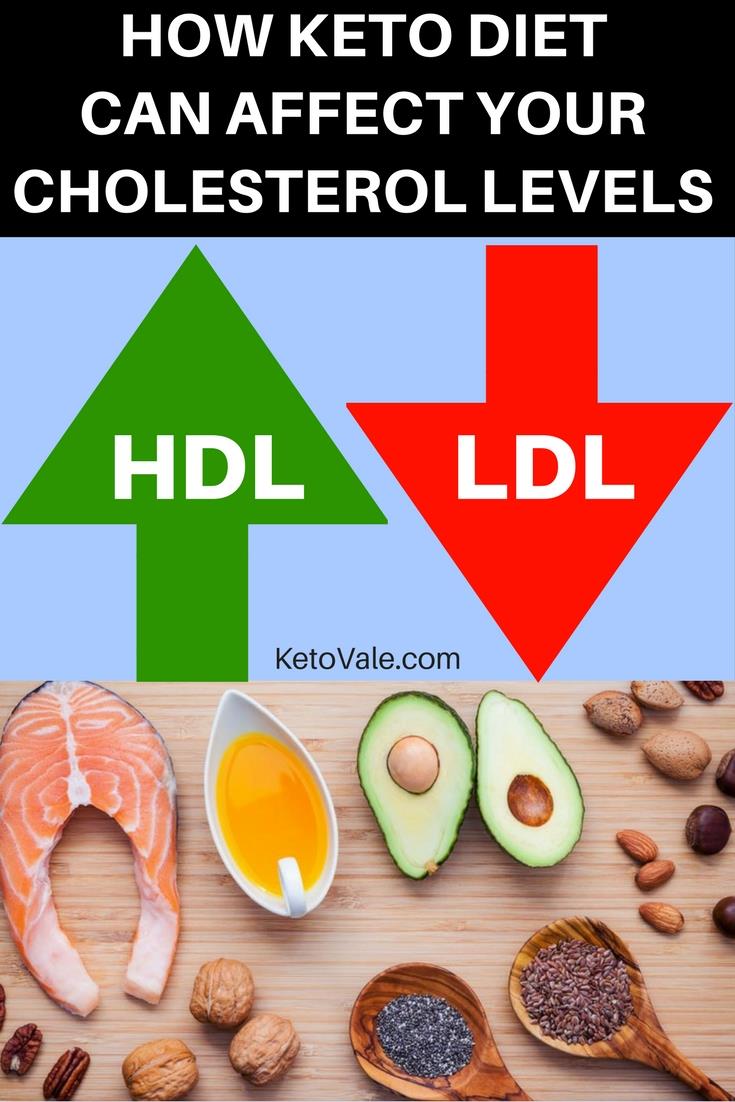