There are many different types of yoga, as they are diverse schools of yoga, such as vinyasa, Ashtanga, Iyengar, Bikram and many more. Yoga has been proven to be highly advantageous not only to the body and but also to the mind, as it improves the quality of mind and reduces stress.

This article discusses not only the gains of yoga but also demonstrates how combining yoga with ketogenic diet can prove beneficial to your health.

Before you continue, don’t forget to claim your free Yoga Kick Start Kit by clicking here! 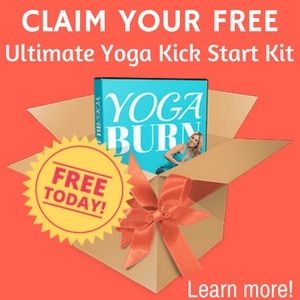 How Yoga Together with Ketogenic Diet Can Improve Your Health

Many people have successfully used yoga as a form of exercise when they’re on the keto diet to tone up their body and improve coordination, balance and flexibility. Here we have listed the top heath benefits of doing yoga, and how some of these benefits are also similar to the benefits of keto diet. You can definitely incorporate yoga with any diet. You can’t go wrong with yoga. 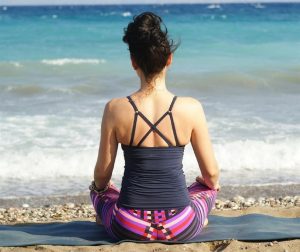 Practising yoga has been proven to help in anxiety and stress reduction. Based on a study conducted in India among 70 people with chronic periodontitis, it was demonstrated that the group of patients who practised yoga had lower scores in the anxiety and the depression scales (2, 3).

Another study in Philadelphia showed that yoga practice results in lower anxiety scores and improved quality of life (4).

Yoga is even more beneficial to women, as it can act as a stress-management tool among breast-cancer patients undergoing radiotherapy and as a treatment for women with posttraumatic stress disorder (PTSD) (5, 6, 7).

Even for women suffering from anxiety disorder, yoga has proven effective in reducing both trait and state anxiety (8, 9).

Yoga practice has also been demonstrated to reduce sleep disturbances and improve quality of sleep.  According to a study conducted in China among 120 nurses, the group which practiced yoga twice a week or more for around 50 minutes after work had a better quality of sleep and less work-related stress compared to the non-yoga group (10).

Yoga practice can be particularly useful among patients with cancer. Based on a US study among 39 patients with lymphoma, the patients who followed Tibetan yoga sessions reported better quality of sleep, faster sleep abeyance and lengthier periods of sleep as opposed to the control group (11). 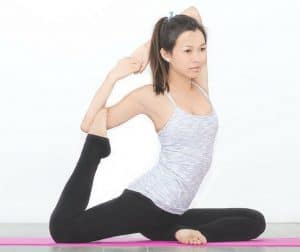 Yoga can reduce anxiety, stress and improve sleep quality but can also help with chronic pain and surgery-related pain. More specifically, yoga can help in pain reduction among people with rheumatoid arthritis, migraine, back pain and other indications (13).

In a study on 112 postoperative cardiac patients who followed yoga sessions twice a week, 89.2% of the participants reported that yoga classes help with the pain after surgery (14).

This view is further supported by a randomized trial among 313 adults with chronic or recurring back pain. The yoga group had improved back function in 3, 6 and 12 months as opposed to the usual care group. Yoga participants also reported lower disability scores and higher pain self-efficacy scores (15).

Yoga can take many forms, and one of them is “chair yoga” which is designed for people who have difficulties standing. Chair yoga also proved beneficial towards back pain according to a randomized, controlled trial among 112 older adults suffering from lower extremity osteoarthritis. The chair yoga group demonstrated higher pain and fatigue reduction than the control group (16).

Yoga, through its asanas and pranayamas, has the potential to improve cardiovascular health. A prospective, controlled, open trial among 114 patients with coronary artery disease showed that the group practising yoga resulted in higher coronary lesions reduction, disease regression and cholesterol levels compared to the control group (17).

Another study on 19 chronic heart failure patients demonstrated that the yoga group had enhanced exercise capacity and improved inflammatory markers than the standard medical therapy group (18).

Yoga can also help in promotion of the cardiac health and prevention of cardiovascular diseases. Yoga practice among young, healthy males can increase cardiorespiratory performance and melatonin secretion, which is directly linked to well-being (19).

But even among older adults yoga can be beneficial. Adults over 40, who have been practising yoga for 5 years compared to people physically inactive have lower systolic and diastolic blood pressure, one of the main risk factors of cardiac diseases (20). 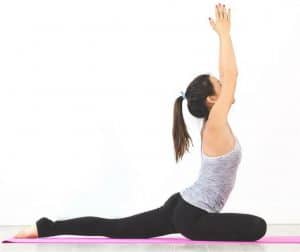 Yoga can be a great way to improve flexibility and balance. Based on an Australian, blinded, randomized study on 54 older adults, 12-week Iyengar yoga practice resulted in better standing balance, improved sit-to-stand test and one-legged-stand-with-eyes closed test compared to the control group (21).

Another study among elderly showed that one year of yoga practice can increase flexibility even four times more than a year of callisthenics, a body weight training and twenty times more than no physical exercise at all  (22).

Although most studies examine the effect of yoga on patients and older generations, yoga practice can also be beneficial to healthy and athletic people. According to a recent study among 14 college athletes, the group which practiced yoga bi-weekly reported increased flexibility and balance as opposed to the control group (23).

Yoga helps in stress relief and pain reduction while it can improve sleep quality, flexibility and heart health. It comes as no surprise that yoga practice is often associated with enhanced quality of life. More specifically, yoga is proven that it can increase health-related quality of life and reduce mood disturbance among cancer survivors  (26).

Another study among 120 seniors living in elderly homes demonstrated that the group who practiced yoga had better sleep quality and higher quality of life scores compared to the control group (28).

Last but not least, a study among 102 pregnant women in Bangalore showed that the yoga group not only reported  better quality of life but also improved aspects in interpersonal relationships compared to the control group (29). 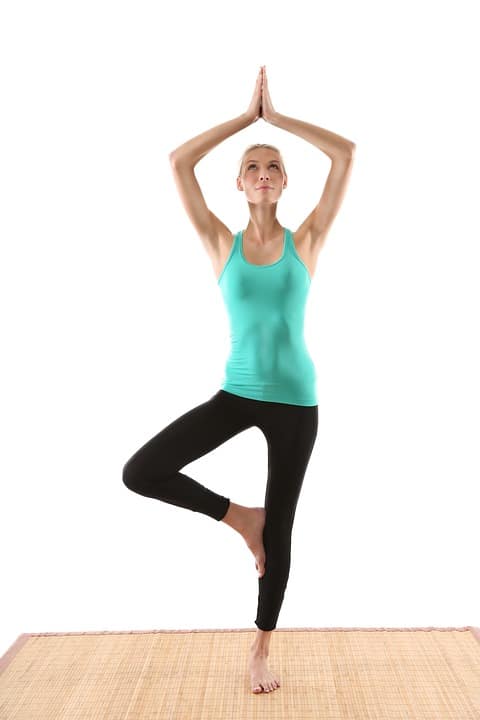 Yoga can be helpful in weight loss and obesity management. Many clinical trials have been conducted demonstrating that yoga can successfully reduce weight, waist circumference and body fat (30).

Yoga practice is particularly helpful for people who have difficulty losing weight and among middle-aged adults. A 10-week, bi-weekly yoga programme consisting of 37 overweight and obese adults resulted in significant weight loss and enhanced phycological state (31, 32, 33).

However, yoga is not the only alternative intervention for effective weight loss. The ketogenic diet, a diet consisting of high fat and low carbohydrate intake, can also help in body weight reduction.

According to a clinical trial conducted in New Zealand among 118 obese adults, a ketogenic diet not only resulted in great weight loss, but also in a significant decrease in triglycerides (35).

It can be argued that a combination of yoga practice and ketogenic diet could prove even more effective in the reduction of body weight and the successful prevention of overweight and obesity.

#8. Has an anti-inflammatory effect

Although yoga is mostly associated with boosted flexibility and stress reduction, it provides another great gain; anti-inflammation. People who have been practising yoga weekly or bi-weekly for over two years have demonstrated lower levels of inflammatory interleukin-6 (IL-6) compared to people who have practiced 12 or less times yoga in their entire lives (36).

More importantly, yoga has demonstrated beneficial effects among people with different types of diseases. According to a study conducted in India on 86 patients with chronic inflammatory diseases, yoga intervention programme resulted in lower levels of IL-6 and tumour necrosis factor in the first 10 days of the trial (38)!

It is also beneficial against multiple sclerosis, as it can supress expression of inflammatory cytokines and chemokines (42).

As yoga practice and ketogenic diet have been scientifically proven to fight inflammation, the combination of these two alternative interventions is prone to successfully guard the body.

Yoga could also be effective as epilepsy treatment, as according to a clinical trial consisting of 32 epileptic adults, the group which practiced yoga demonstrated lower number of attacks and reduced severity of seizures as opposed to the  control groups (46).

The decreased magnitude of seizures can be attributed to the enhanced parasympathetic nervous system activity, reduced stress and anxiety levels and elevated thalamic gamma amino-butyric acid (GABA) levels, all of which are yoga practice outcomes (47).

It is known that ketogenic diet can be utilised as epilepsy treatment, as this was the main reason Wilder invented it in 1921. Ketogenic diet can induce ketosis and has been proven to reduce seizures among children suffering from refractory epilepsy (48).

Besides epilepsy, ketogenic diet has proved to be an effective treatment against other neurodegenerative diseases, such as Alzeheimer’s, Parkison’s disease, amyotrophic lateral sclerosis  and a variety of mitochondriopathies (49).

Moreover, ketogenic diet possess antioxidant properties which reduce the frequency and the magnitude of seizures and also has demonstrated a positive effect on neurotransmitters (50).

The antioxidant and neuroprotective attributes of the ketogenic diet together with the ability of yoga to activate the parasympathetic nervous system are inclined not only to protect the nervous system but also to provide balance and clarity of mind.

#10. Could reduce risk of diabetes type 2

Diabetes is a major health problem and has many risk factors, including but not limited to: obesity, stress, anxiety, increased blood pressure, increased cholesterol and many more (51).

Yoga practice can assist in preventing the risk of developing diabetes type 2, as via yoga postures and asanas, many risk factors of diabetes can be reduced significantly.

A study conducted in India among 41 adults, demonstrated that yoga practice resulted in decreased levels of systolic and diastolic blood pressure, total cholesterol levels and reduced feelings of anxiety, depression, and perceived stress. Moreover, the group which practiced yoga showed greater decreases in weight loss, BMI and  waist circumference reduction compared to the control group which was involved in walking sessions (52).

More evidence on effective type 2 diabetes management due to yoga asanas and pranayamas is provided by a study conducted in India among 60 patients suffering from diabetes type 2. This 45-day study demonstrated that yoga practice resulted in greater decreases in blood glucose levels, lipid profile and serum insulin levels compared to the control group (54).

Although ketogenic diet is rich in fat and not an obvious choice for diabetes diet, the body converts fat instead of sugar into energy. In other words, ketogenic diet has the potential to decrease the need for insulin while in parallel improve the blood glucose levels.

According to another study recruiting 84 people suffering from obesity and diabetes type 2 in the US, the ketogenic diet group displayed greater increases in hemoglobin A1c body weight and more significant weight loss as opposed to the control group following a low-glycaemic, reduced-calorie diet (56).

Studies have demonstrated the improved clinical outcomes of yoga practice interventions but also ketogenic diet programmes among people with obesity and diabetes type 2. One could assert that a combination of the both interventions could assist in the prevention and management of diabetes mellitus.

Yoga and ketogenic diet have been the center of many clinical trials and scientific studies. Their benefits range from stress and anxiety reduction to fighting inflammation and treating epilepsy and diabetes type 2. Combining yoga practice with ketogenic diet could prove highly beneficial to your health, your body and your mind.

If you find this article useful, feel free to share it with your friends or save this post by pinning this picture below to your Pinterest board for later reference. 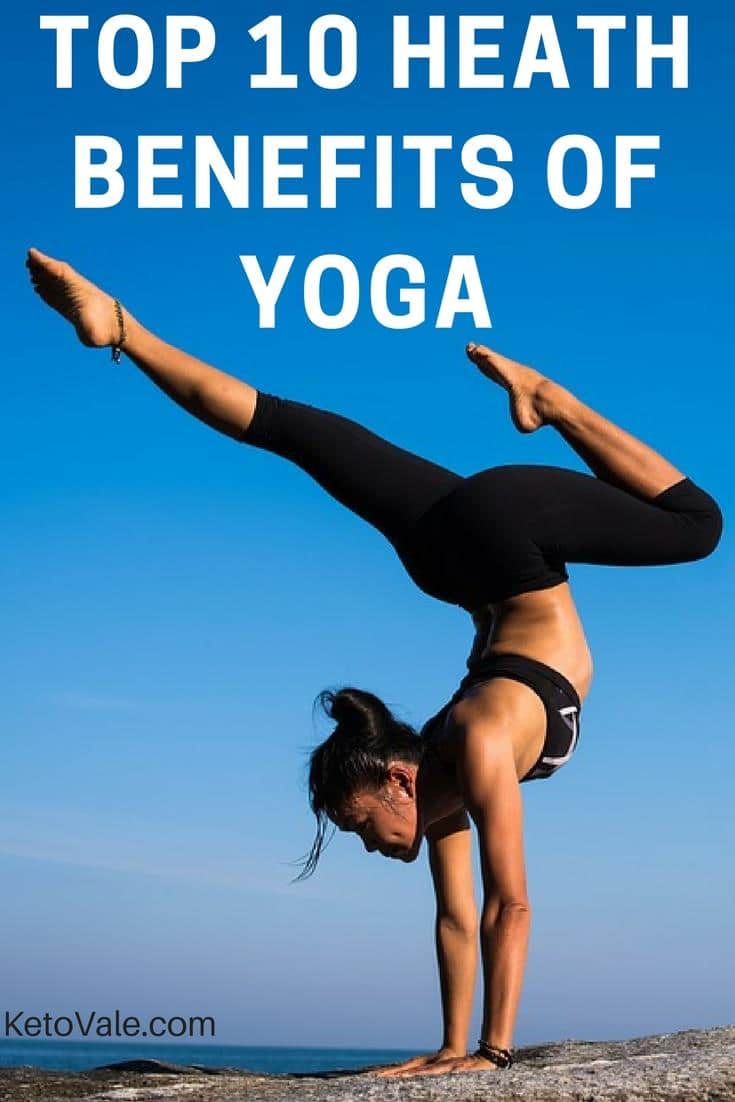