If you had to give up cow’s milk when you started following a low carb or keto diet, then you might feel like you lost something really great.

After all, it’s needed to make so many delicious foods – such as ice cream – and even baked goods like bread, cupcakes, and cookies.

In this guide, we’ll break down the differences between two popular cow’s milk substitutes: almond milk and coconut milk. Read on to learn if they fit into your low-carb diet.

Almond milk is made by soaking almonds in water overnight, rinsing and draining them, blending them with fresh water, and then separating the almond pulk from the liquid (milk)

Some brands of almond milk contain added sugars, flavoring, and other unwanted ingredients that you’ll want to avoid. Here are the carbs in almond milk and other macronutrients per 100-gram serving of unsweetened version (*):

Coconut milk is made by blending water and grated coconut meat and then separating the liquid (milk) from the meat. Like almond milk, coconut milk may contain added sugars and flavors that should be avoided. Here are the carbs in coconut milk and other macronutrients per 100-gram serving of unsweetened version (*):

How Many Net Carbs in Coconut Milk vs Almond Milk?

Both almond milk and coconut milk are much lower in carbs than regular cow’s milk. However, it’s important to make sure you buy the unsweetened kind to keep the carbs down.

Both milks are also low glycemic, which refers to how quickly certain foods spike your blood sugar levels. Almond milk has a glycemic index (GI) of 25 while unsweetened coconut milk has a GI of about 31. For reference, any food with a rating under 55 is considered low glycemic.

Almond Milk vs. Coconut Milk: Which is Healthier?

Both milks are a much healthier option than cow’s milk because they contain less sugar and carbs, more healthy plant-based fats, and no lactose.

Lactose is a type of protein found in milk that tends to be highly inflammatory for many people because they lack the enzyme needed to digest it. This can lead to digestive symptoms, such as bloating, constipation, intestinal pain and gas, or diarrhea.

Lactose and cow’s milk have also been linked to skin conditions, such as acne, while dairy that contains lower levels of lactose (such as cheese) is less likely to cause skin problems (*).

If you have been diagnosed with an autoimmune condition, then you may find relief in part by removing cow’s milk from your diet and replacing it with almond or coconut milk instead (*).

Coconut milk is unique because it contains anti-inflammatory medium-chain fatty acids, or MCTs, which may help reduce inflammation associated with autoimmune conditions (*).

MCTs are also much easier to digest than other types of fat because they do not require pancreatic enzymes for digestion, making them ideal for anyone who suffers from a gastrointestinal disease (*).

Almond milk is incredibly nutritious, too. It contains healthy monounsaturated fatty acids that have been shown to reduce cholesterol and even reduce leg and stomach fat (*).

Like coconuts, almonds are a good source of antioxidants, too. They are especially high in vitamin E, which has been shown to protect against oxidation that may lead to atherosclerosis, cancer, aging, arthritis and cataracts (*).

The best way to get the most nutrition out of your almond or coconut milk is to make them at home using whole, organic ingredients. If you buy your milk at the store, it should be free from added sugars, flavors, food colors or dyes, and excessive sodium and preservatives.

Some brands of store-bought milk are also vitamin-fortified, which is a good way to get more nutrition in. Just be sure they do not contain carrageenan – an additive commonly found in nut milk that may lead to intestinal inflammation (*).

Are Coconut and Almond Milk Keto-Friendly?

Yes, both almond milk and coconut milk are keto-friendly plant-based milks, as long as they are unsweetened. However, almond milk is lower in carbs than coconut milk, making it better suited for strict keto dieters.

We recommend adding both nut milks to your diet if you are looking to cut carbs and enjoy milk again. They can be used in smoothies, coffee, as liquid additives for baked goods (cookies, pancakes, waffle mix, brownies, and more), or enjoyed in a keto-approved cereal.

Both milks have a slightly nutty flavor that may enhance the flavor of whatever you are using it with, but most people find the taste to be enjoyable. If you are making your own nut milk at home, then consider using keto-approved sweeteners, such as monk fruit, stevia, or erythritol.

Keep in mind that a 100-gram serving of coconut milk contains almost 3 grams of net carbs, so be sure to stick to this amount if you’re worried about your carb intake. You can even cut your coconut milk with almond milk to keep the carbs down while enjoying both at the same time!

No matter what your preferred nut milk is, make sure you buy the unsweetened version that is free from carrageenan. 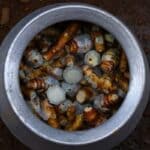